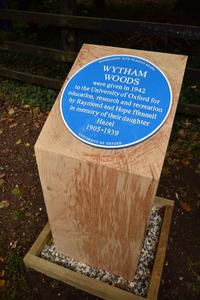 It has been 75 years since the Wytham Woods passed into the University of Oxford’s possession, and on Saturday 7 October the anniversary was marked by the unveiling of a blue plaque commemorating the bequest of the land by the ffennell family.

Raymond and Hope ffennell gave the Woods to the University in 1942, following the premature death of their only child Hazel, who had deeply loved the woods. Simon ffennell, a descendent of the family, unveiled the plaque in a ceremony at the entrance to the woods, which was also attended by guests including local government representatives and academics.

Wytham Woods’ 1000 acres include habitats ranging from ancient semi-natural woodland dating back to the last Ice Age, limestone grassland, ponds and wetlands. They contain a wealth of living things from bats, beetles and badgers to some 800 species of butterflies and moths.

For the anniversary year, the team has planned a series of events which will see members of the public engaging with Wytham’s scientific research more than ever before.