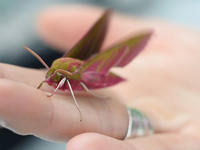 Wytham Woods are one of the most researched areas of woodland in the world. They are also a hugely popular place with the media: there are numerous examples of BBC radio features highlighting projects there. The local newspaper archive holds a wealth of positive Wytham Woods stories, including one calling it ‘the county’s favourite laboratory’.  Wytham is also a regular haunt for TV and film researchers and documentary makers.

Meeting the obligations of the gift of the Woods to the University requires a careful balancing act. ‘The Woods are to be utilised for education and research’ and ‘to be enjoyed by the population of Oxford’ but the University must ‘maintain their natural beauty’. Interest levels are high. There are more than ten thousand active permits allowing access, equating to around 20,000 visitors a year. Many school groups visit the site, alongside other organisations which use it for training. Moreover, the Conservator organises regular talks and walks.

There is a similar challenge when it comes to media interest, with each new press report, radio feature and TV documentary adding to the number of calls from would-be visitors. The approach of Wytham Woods Conservator, Nigel Fisher, is to work closely with the media, to connect with film companies which have regular commissions and so come to understand the Woods and how to work there, and to create the 'Laboratory with Leaves' YouTube video series, made by Angel Sharp Media.

Says Nigel: ‘We see the media and film work as part of our outreach mission and it is very important to us for that reason. We can also point to examples where a film or some other positive coverage inspires other research projects that have subsequently developed.’

Work at Wytham has included visits by BBC Countryfile and Autumnwatch. Dr George McGavin, TV presenter and Honorary Research Associate at the Oxford University Museum of Natural History and the University’s Zoology Department, told the story of a 350-year-old oak tree at Wytham over a year in its life for a BBC4 documentary. The film ‘Oak Tree: Nature’s Greatest Survivor’ won the Royal Television Society’s Science and Natural History Programme Award in 2016.

Another recent visitor is particle physicist and Royal Society research fellow, Professor Brian Cox, who visited Wytham to make documentary. The Discovery Channel has filmed at Wytham, and the Woods have even hosted a music video shoot. BBC Radio Oxford regularly highlights Wytham Woods, with recent features including collaboration with Japanese and British potters to build and fire a traditional Anagama kiln, and the Big Wild Sleepout initiative with the RSPB.

A documentary screened in late 2017 – Judi Dench: My Passion for Trees – also featured the Woods and some of the arboreal science that takes place there, from scanning the canopy with lasers to the treetop walkway researchers use to investigate life among the branches.

Hannah Madsen at Angel Sharp Media sums up the high level of interest in and enthusiasm for Wytham: ‘With its stunning woodland, engaging characters and highly accessible research topics, Wytham Woods is a perfect showcase that brings Oxford's world-class research to life – literally!’